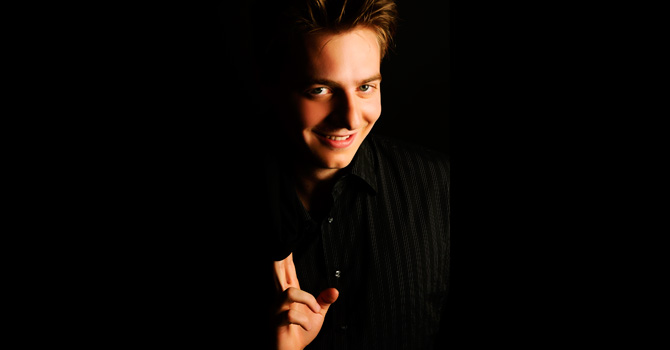 Swiss pianist Patrick Leresche has graduated from the University of Arts in Bern (Switzerland) with a Master of Piano in Pedagogy before coming to London to study at the Guildhall School of Music and Drama. After receiving a Masters of Performance in Piano Accompaniment with Distinction, he is staff accompanist at the Guildhall School of Music and Drama, teaches piano on a private basis and performs on many occasions.
Patrick has won the Swiss National Competition for young musicians twice, is a prize winner of the Hans-Ninck Music Prize, has been invited to the European Music Competition for Youth in Weimar and was chosen to represent Switzerland at the Steinway Festival in Hamburg. He has given concerts as soloist, chamber musician and accompanist in Switzerland, England, the United States and Japan. He has performed Mozart's Concertos KV 414 and 415 with orchestra as well as Beethoven's first Piano-concerto, Weber's Konzertstück, the Double Concerto of Mendelssohn and the Concerto in f by Gershwin, which has been released on the label Amos. He has worked together with teachers such as Graham Johnson, Iain Burnside, Charles Owen, Julius Drake and André Tribuzy. At the Biennale Bern he has played the Swiss première of Kepler's Dream by Italian composer Battistelli. Patrick has worked together with the Swiss composer David-Philip Hefti on several occasions and has played the UK premier of his song cycle "Rosenblätter" in January 2012 in London and Manchester.
As an accompanist, he has been invited to play for a Masterclass of Hans-Peter Blochwitz and some productions of the Swiss Opera Studio in Biel (Switzerland). He has been playing for the singing class of Australian soprano Yvonne Kenney for a year and is currently accompanying Prof. Detlef Hahn's violin class. During the summer 2014, he was a repetiteur for the productions of the Walenseebühne (My Fair Lady) and the Operettenbühne Hombrechtikon (Zar und Zimmermann).
Next to his activities as a classical pianist, Patrick is very much interested in cross-arts projects, which break open the common boundaries of the classical traditions. During his studies at the Guildhall School of Music and Drama he has been working with Prof. David Dolan in the course of the module Interpretation through Improvisation and has had the chance to improvise and play together with actors. As part of his final exam of his studies he wrote a play about Robert Schumann's life based on the letter conversation with his wife Clara, which includes acting, improvisation and interpretation. It was shown at the Reflective Conservatoire Conference 2012 and will be shown in Luzern (Switzerland) this November. Another project cross-arts project Patrick has been involved with was the theatrically staged "Lads in their hundreds", directed by Iain Burnside. The piece was performed at Theatro Technis (London), at The Weekend of English Song in Ludlow and on a live broadcasting on BBC Radio Three.